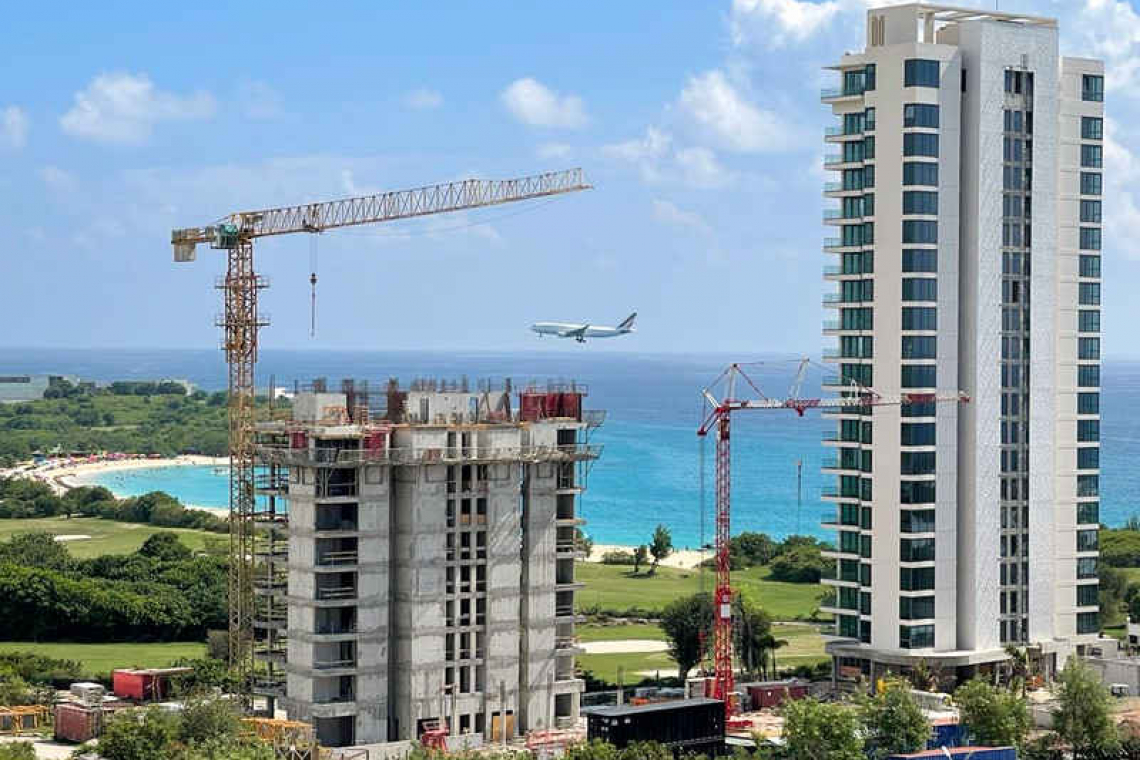 MULLET BAY–The approximately US $65 million 21-level high-rise towers coined “Fourteen” in Mullet Bay are shaping up to become emblems in the country and seem to represent continued investors’ interest in the economy.

Developer of the massive project Frank Teboul the Chief Executive Officer (CEO) of FT Development, explained that the project comprises two high-rise tower buildings located directly in front of hole number 14 on the Mullet Bay golf course. “This was the inspiration for the name of our project, ‘Fourteen’,” Teboul said.

Calling it an ambitious project, Teboul said the two high-rise towers of 21 levels each consist of 150 condominiums in total. There will be both uncovered and covered parking, a 25-metre swimming pool, gym, two lobbies, concierge service, restaurant, pool bar and 24-hour security service.

“We have implemented and provided a management service to our customers that will be comparable to the hotel industry,” he told The Daily Herald.

The idea for the project was birthed a few months prior to the devastating Hurricane Irma in 2017.

“We were issued our building permit in December 2017. The total project completion date for all phases of the project will be in the second half of 2023. This development, in our view, targets optimistic investors, investors who believe in country St. Maarten and its success and positive outlook for the future. In addition to this, our clients, generally, are investors seeking high-end products that generate good returns on their investment,” he noted.

To construct high-rise buildings such as “Fourteen” has been Teboul’s dream as a developer.

“After Hurricane Irma, we immediately identified that higher standards needed to be implemented to ensure the protection of our development, our neighbours and our clients’ investments. We employed engineers experienced in the construction and design of large buildings who created the para-cyclonic and seismic design for these buildings. We have made every effort to withstand natural disasters,” he explained.

“Today we’ve learned that the market was no longer tailored to larger-sized units; instead, the demand has shifted toward the one- to two-bedroom apartment with a surface area between 50 and 100 square metres. Qualifying budgets are between the $250,000 and $550,000 price range.”

The units in the Fourteen development are intended for short term rental.

“Our location is uniquely situated in the heart of Mullet Bay in front of the most beautiful beach on the island, offering an exceptional view in a very secure residential area at the gateway to Maho and just five minutes away from Princess Juliana International Airport. We also thought about creating a beach club on Mullet Bay Beach. We have done our best to comprise and make available all of the possible comforts and leisures of our customers (beach, restaurant, golfing, nightlife).”

Through the project, around 20 different companies of which 90 per cent are local gained employment. “Upon the completion of this project, we will subsequently create employment opportunities in the areas of management, maintenance and hospitality.”

Teboul is confident that the project will forever remain an emblem of St. Maarten and is the ultimate residence.

His goal is “to work in conjunction with the respective stakeholders pertaining to infrastructure services to improve things such as sidewalks and walkways, amongst other things; to develop in an urban integrated approach while respecting the environment. We continuously seek feedback and support from our close surroundings and representatives.”

“Within each of our completed projects, an economy is created consisting of, but not limited to, the local trade, rental and job creation. This is the added value that we bring to St. Maarten,” Teboul said.

DH | Ansary ordered to pay over NAf. 1 billion in damages

with verdict WILLEMSTAD/PHILIPSBURG--The Court of First Instance in Curaçao gave a verdict on Monday...
Antilliaans Dagblad