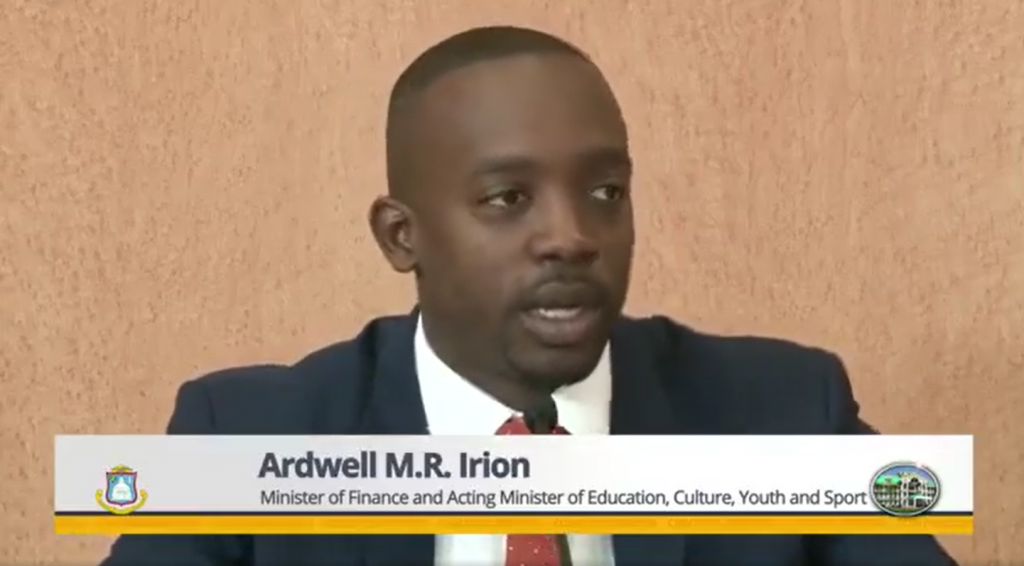 PHILIPSBURG–Ardwell Irion, Minister of Finance on behalf of National Alliance (NA), signed for the issuance of long-lease land in the area Over the Bank, to a relative of his NA party colleague Egbert Doran, Minister of Public Housing, Spatial Planning, Environment and Infrastructure VROMI.

Minister Irion on Wednesday confirmed this during the Council of Ministers press briefing.

Irion was mandated by Doran by Ministerial Order of July 3, 2020, to issue land on a long-term lease if its issue would be a conflict of interest for Doran, when it comes to the granting of a piece of government land to his wife, partner or relative. Finance Minister Irion expressed his willingness to issue land on Doran’s behalf.

He continued: “It is normal; before every Council of Ministers meeting, the question is posed from the chair – the prime minister is chairing, or when the [prime minister – Ed.] PM is not there, I am chairing – asking: are there any conflicts of interest? If this is the case, the minister that has a conflict of interest has to step out of the room. The acting minister, or the Council of Ministers, then makes a decision.”

Five of the seven ministers in the cabinet Silveria Jacobs II, including Doran and Irion, represent the National Alliance. “If there was a conflict of interest concerning the list of 25 applicants for long-lease land as part of Vineyard Heights, the minister of finance, who is the acting minister of VROMI, had to sign it,” Doran repeated on Wednesday.

On June 25, 2021, a parcel of long-lease land was granted to a cousin (daughter of his aunt) of Minister Doran, with whom he is said to be very close. The cousin is one of 25 persons that were allotted parcels to accommodate Area A of the “Vineyard Heights” development project, situated in the area behind the Vineyard building in Philipsburg.

The list of new leaseholders was narrowed down from “hundreds of requests for land in long lease over the years,” Minister Doran explained in a June 25 letter, referencing applications from 2016 up until May 2021. “Some of these requests can be considered dormant as no follow-up has been done with the Department of Domain Affairs.”

Minister Doran chose to select from the applications that have been submitted since the beginning of 2020. These recent applications were labelled by the minister as “most active and relevant”. In choosing, the minister considered that the applicant needed a monthly income of at least 3,000 NAf. or a joint income of that amount. If the applicant could prove otherwise having sufficient funds to build a home, the minister would take that into consideration. The applicant was not allowed to already have a piece of land in his or her name.

How many applicants there were to choose from since January 2020 is not known. Nor is it known which criteria were used to narrow down the list to 25. Doran made it publicly known in radio interviews that 90 per cent of the new leaseholders at Vineyard Heights are civil servants. One works in the Parliament Building, one is employed by the Ombudsman, another is an assistant at the Ministry of Finance. One man on the list is a former inmate with an extensive criminal record.

Although Irion is mandated to avoid conflicts of interest, Minister Doran can nevertheless decide to sign himself. According to the Ministerial Order of July 3, 2020, “the minister remains empowered to exercise the mandated power and may revoke the mandate at any time.”

Based on the law, Minister Doran said, “I can sign it myself. But in order to avoid situations where there is a conflict of interest, the ministerial order was created, to do things the correct way.”

Minister Doran said he comes from a very large family, including those with the names York, Illis, Flanders, Duzon, “and the list goes on.” Doran said he would not be able to function as a minister, if he were to avoid all contact with relatives. “We live on 16 square miles. Being part of the Council of Ministers, definitely a meeting will come up that will affect somebody directly or indirectly. We put all these mechanisms in place to avoid such.”

Minister Irion added: “I had to confirm with my staff. Indeed, there was a conflict of interest, and I did sign it off.”