The leader of the British Virgin Islands (BVI) has been arrested for alleged drug smuggling and money laundering in the US. Premier Andrew Fahie was detained in Miami by US agents posing as cocaine traffickers from a Mexican drug cartel.

Foreign Secretary Liz Truss has said she was “appalled” by the allegations.

Mr Fahie, the elected head of government of the British overseas territory, was arrested by US Drug Enforcement Agency (DEA) officials in Florida, alongside senior BVI port official Oleanvine Maynard.

A third person, Kadeem Maynard – Ms Maynard’s son – was also arrested on Thursday in connection with the undercover DEA case.

The arrests were made after DEA agents pretended to be cocaine traffickers from Mexico’s Sinaloa Cartel – said to be the largest supplier of illegal drugs to the US market and formerly run by now-imprisoned drug lord Joaquín ‘El Chapo’ Guzmán.

The trio have been charged with conspiracy to import more than 5kg (11lb) of cocaine into the US and conspiring to commit money laundering, authorities said.

In a criminal complaint filed in a US federal court, reviewed by the BBC, the DEA said the investigation was launched in October based on work carried out by a confidential informant.

The document sets out details of a series of alleged meetings between the three and the DEA source including their use of aliases – with Mr Fahie known as “head coach”.

The informant is said to have claimed in meetings with Mr Fahie to be a cartel member aiming to smuggle thousands of kilograms of Colombian cocaine worth tens of millions of dollars through the BVI, with the drugs to be shipped to US Caribbean territory Puerto Rico and then on to Miami and New York.

Mr Fahie and the DEA informant also discussed setting up pre-arranged drug busts of money and low-quality drugs to make it look like the BVI leader was fighting crime in the islands, the charges said.

He told the informant during one meeting that the UK government had been trying for years to remove him from office, the documents claimed.

Mr Fahie is quoted as saying: “I have plenty of people, and I don’t sell them out to the British with their plans… they always want to capture people, but me I see what they are doing and I protect the people.”

He and Ms Maynard were later arrested on a visit to Miami, after being separately shown a private plane and designer shopping bags, which authorities said contained $700,000, according to the charges.

There have long been questions about the way the British Virgin Islands have been run.

Since January last year, Andrew Fahie has been the subject of an inquiry into allegations of misgovernment and corruption.

But now the premier of the British Overseas Territory is in custody, facing charges of drug trafficking and money laundering.

Foreign Secretary Liz Truss said the arrest demonstrated the importance of the commission leading the inquiry, whose report she expected to be published soon

The commission hit the headlines last year when it emerged Mr Fahie was being defended by a Conservative MP, the former Attorney General, Sir Geoffrey Cox. 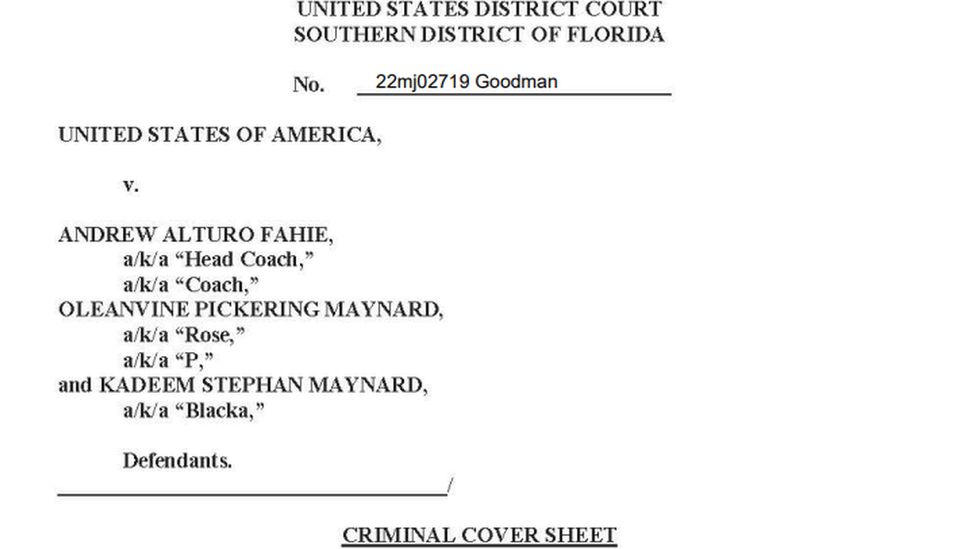 The BVI is a British overseas territory made up of more than 40 islands, located in the Caribbean to the east of Puerto Rico.

It operates as a parliamentary democracy, with the premier acting as the head of the elected government alongside the governor, John Rankin, who is appointed by the UK government.

Leaks of documents known as the “Panama Papers” and “Paradise Papers” revealed the islands to be a popular tax haven.
2px presentational grey line

Aliases and secret meetings – what is in the court papers?
Court papers giving the names and aliases of the defendantsImage source, US District Court Southern District of Florida

Court documents claim that the BVI premier Mr Fahie, along with the Maynards, had a series of meetings with a man they believed to be from a Mexican drug cartel to discuss moving thousands of kilograms of cocaine. These meetings took place both in Tortola, the largest island in the archipelago, and in the US Virgin Islands, according to the documents.

Ms Maynard is reported to have said she could assist with paperwork and to have described Mr Fahie as “a little crook sometimes”.

After allegedly contacting the premier, Mr Maynard is said to have messaged the source (believing them to be part of a drug cartel) telling them that the “head coach wants to play football with the team this season”- apparently referring to Mr Fahie.

For his part, Mr Fahie is said to have asked for $500,000 up front, as well as the settling of a debt with a contact in Senegal, who had “fixed” political issues for Mr Fahie, the papers say.

The papers say both he and Ms Maynard were also due to get a percentage of all cocaine sales in the US resulting from the deal – potentially worth millions.

During one call with the source, Mr Fahie is said to have asked if the source was law enforcement, saying: “It took me 20 years to get here and I don’t want to leave in 20 minutes”.

On another occasion, he is said to have complained that the “British didn’t pay him much”.

After meeting in a Miami hotel to finalise details of the arrangement, both Mr Fahie and Ms Maynard were separately taken to a private plane in which there was $700,000 in cash inside designer bags, the document says. Upon leaving the aircraft, they were arrested.

Mr Fahie is said to have said: “Why am I getting arrested, I don’t have any money or drugs”.
2px presentational grey line
‘Governance and corruption’

After being informed by the US government of the arrests, Ms Truss held talks with Mr Rankin – who was due to hold an emergency meeting of the territory’s cabinet on Thursday.

She said: “This afternoon, the Premier of the British Virgin Islands, Andrew Fahie, was arrested in the United States on charges related to drugs trafficking and money laundering. I am appalled by these serious allegations.”

In January 2021 an independent inquiry into corruption in the islands was launched, amid long-standing allegations of state corruption.

In a statement, Mr Rankin confirmed the arrest was not related to the ongoing inquiry.

He declined to comment further, but added: “To avoid unnecessary speculation, I intend to move ahead urgently on publication of the inquiry report so the people of the BVI can see its contents and its recommendations in the areas it addresses.”

Mr Fahie and officials from the British Virgin Islands Ports Authority could not be reached for comment when contacted by Reuters news agency, and the premier’s office did not immediately respond to requests for more information.