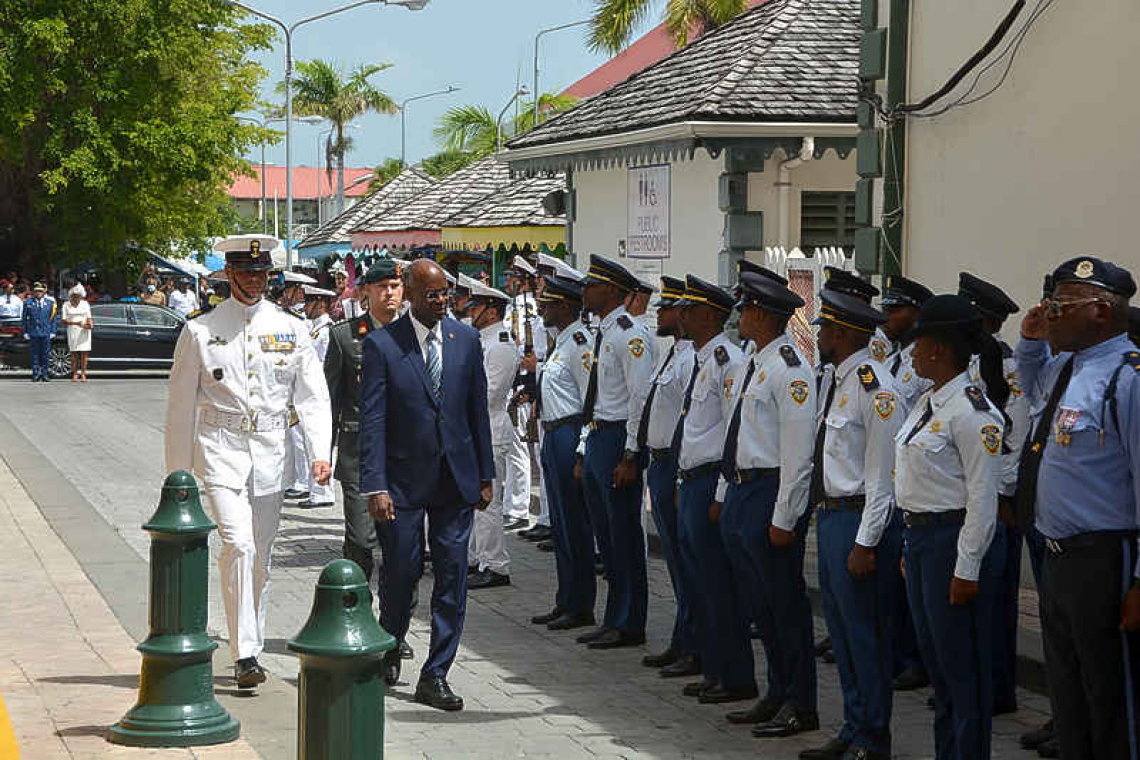 PHILIPSBURG–“Five days from today, on Monday, October 10, 2022, my term will come to an end,” Governor of St. Maarten Eugene Holiday said in Parliament on Wednesday, bidding farewell to the people of St. Maarten and their government, as well as dignitaries and relations within the Kingdom of the Netherlands.

“I bid you farewell also on behalf of my former colleague and friend, former Acting Governor the late Reynold Groeneveld who regrettably is no longer with us,” Holiday said. He requested a moment of silence in honour of Groeneveld’s dedicated and distinguished service to St. Maarten, as the first acting Governor of St. Maarten from October 10, 2010, to May 24, 2022.

Twelve years ago, Holiday also stood in the House of Parliament. “I accepted the function as Governor of St. Maarten before, you the people, through the Parliament of St. Maarten on October 10, 2010.”

He was appointed Governor of St. Maarten by kingdom decree of September 20, 2010, and travelled to the Netherlands to take the oath of office before Her Majesty Queen Beatrix on September 30, 2010. On his return to the island, he became the first governor of Country St. Maarten on 10-10-10.

“On that historic day, Marie Louise and I set out with you on a new journey into uncharted waters,” Holiday recalled.

“Today we stand at the portal of our new Country Sint Maarten. From personal experience I can inform you that the road to this moment was not smooth. But we made it.” With these words Holiday started his acceptance speech.

On Wednesday Holiday gave an overview of his achievements in the past 12 years.
“Considering the challenges and opportunities, I, in taking on my responsibilities as your governor, from the onset established ‘Excellence in governance to serve you, the people of St. Maarten’ as my vision, a vision aimed at working with government and parliament to provide you, the people of St. Maarten, the highest possible standard of governance, a vision which I pursued during my two terms in office.
“I did so with an unwavering belief in and appreciation for St. Maarten, our people and our potential; a belief which I continue to have.”

During the past few weeks various persons have extended best wishes and thanks to the governor and his wife for the work they have done.

“Your well wishes have been heart-warming and we are grateful for your words of support,” Holiday said. “It has been an honour and privilege to serve as your governor for the past 12 years. Throughout my tenure I have been able to depend on the support of many in our community and for that I hereby express my heartfelt thanks to the people of St. Maarten. Your interest and support have been my primary source of inspiration and motivation.”

Looking back at his 12-year tenure, it has been an extraordinary journey, Holiday said. “I have witnessed the stages of growth and the growing pains of country St. Maarten, I have experienced and shared in the moments of joy and the moments of disappointments, and I have offered guidance, gave encouragement, and where and when necessary warned.”

Holiday and his wife remember the contacts with many persons in the community through national events, through the governor’s New Year receptions, through working visits at schools, visits with the elderly, to government departments and others.

“These are moments and experiences Marie Louise and I will always remember fondly,” Holiday said. “It was at moments like those that I always emphasised the importance of maintaining a standard of excellence. In that regard the youth have always been my focal point, which led to my introducing the Governor’s Youth Awards for Excellence to encourage our youth to always strive to be the best they can be, in preparation for their service to our country.”

Challenges
His work as Governor began de facto with the September 17, 2010, elections. “Following the elections, I invited the political leaders of the parties that won seats in Parliament for consultation,” he said. “In so doing, I began my first oversight and guidance of the government formation process resulting in the appointment and installation of the first Council of Ministers of St. Maarten.”

That very first formation process, he said, was a signal of what was to come: there were some objections to the screening of candidate ministers and there was ship-jumping.

The screening of candidate ministers has remained a bone of contention for some, to this day, he said. “The level of contention and objections was only increased in October 2014 when the kingdom government issued an instruction by kingdom decree regulating the screening of candidate ministers and charging me in my capacity as governor with the execution of the kingdom decree. This caused further controversy in the already-strained relations between Philipsburg and The Hague.”

Holiday concluded: “For the building of any nation, of our nation, it is essential to set and pursue the highest possible standards of governance. Ensuring that the holders of public office meet certain integrity and national security standards is fundamental to guaranteeing the quality of government needed for the development of our country.

“I therefore applied a consistent approach to the screening of candidate ministers at every government formation during my tenure. That was possible thanks to the cooperation of all the formateurs and prime ministers who worked with me during my tenure. I therefore commend them for that and trust that we will continue to uphold that standard.”

“I established a panel of judges to resolve the constitutional crisis following the 2015 fall of government,” said Holiday.

“My decisions to ratify the call for early elections by the government in 2017 in the aftermath of Hurricane Irma and by the government in 2019 were called into question by officials on both sides of the Atlantic. In that regard I wish to note that the right to vote and be voted for is a democratic standard; it is one of the most sacred rights in our parliamentary democracy and it is our greatest obligation to provide the opportunity for voting to take place.”

Looking back, Holiday cannot imagine that “there is anyone who would say that the political discord and partisanship of the past 12 years is the standard we want for our political process.” As a country, he stressed, “it is our obligation to self-correct and steady the political ship as we journey into the next phase of our country’s development. An obligation that calls for us to rise above the narrow confines of our individual interests to the higher and broader concerns of our society.”

This realisation is critical, he said, “because it seems that too often public and private policies are driven by politics and factors other than those that are in the interest of the people.”

External shocks
Holiday’s second term was characterised by the impact of Hurricane Irma and the ongoing impact of the COVID-19 pandemic. The magnitude of both crises resulted in the need and declaration of states of emergency, including a hard lockdown of the country in the case of COVID-19.
“The damages caused to our infrastructure and to our financial and economic foundation are substantial,” Holiday noted. “They have weakened the financial position of businesses and households and left our government cash-strapped.”

These two crises are game-changers for the country, he said. “Considering the global nature and external linkages of these crises endured, it is essential that our national strategy focusses on strengthening existing and creating new partnerships within the kingdom and in our region, partnerships based on the understanding that global challenges require interkingdom and transnational solutions.”

Holiday remains hopeful: “In the face of our challenges I have seen the flaws of our country but have been gratified to see that there have always been people, politicians and others ready to roll up their sleeves to find solutions and a path forward. In the face of political discord there were always persons who rose to the occasion to perform their civic duty.”

In closing, Holiday said: “It has been my honour to serve you as your first governor and thus constitutional Head of Government on behalf of the King, a true privilege as a son of the soil and patriot to help build St. Maarten in its formative years as a country within the Kingdom.”