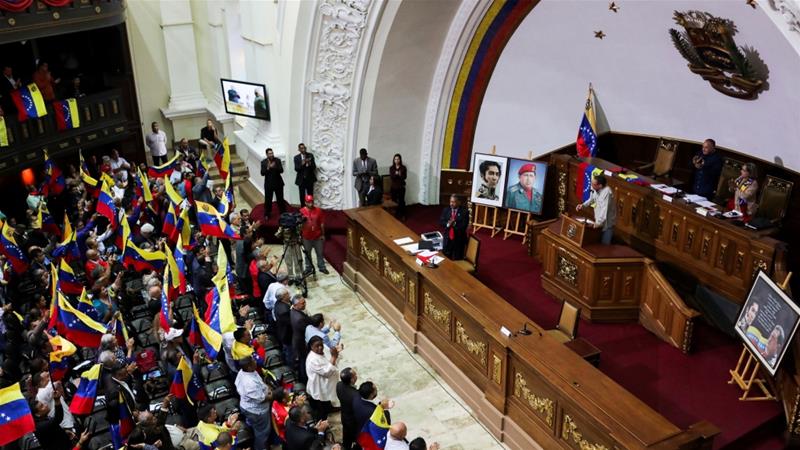 Venezuela’s pro-government Constituent Assembly was holding an unscheduled session on Monday, with the opposition warning that it was preparing to announce the dissolution of the opposition-controlled National Assembly.

The warning was given by opposition leader Juan Guaido, who said in a video published on Sunday that President Nicolas Maduro’s government was planning to call early elections and dissolve parliament.

“If … they do what they are planning to do, we shall have a phase of greater conflict,” Guaido said in the video, which was posted on Twitter.

Constituent Assembly President Diosdado Cabello confirmed on Sunday that the assembly would hold a “session for peace”.
US sanctions: Juan Guaido supports US sanctions on Maduro (3:43)

Created in 2017, the Constituent Assembly was widely seen as a bid by Maduro to replace the National Assembly, the country’s parliament, which had been stripped of its powers for allegedly swearing in legislators whose elections were not valid.

The National Assembly remained as the main bastion of the opposition, with Guaido elected its president in January. Parliamentary elections are not due before late 2020.

Guaido also said on Sunday that the government was preparing to “massively persecute” legislators in the National Assembly by stripping them of their parliamentary immunity.

On Monday, the Supreme Court asked the Constituent Assembly to lift the immunity of three more legislators on charges including treason, the ruling Socialist Party and the daily El Nacional said.

That brings to 18 the number of opposition politicians, including Guaido, accused this year of treason, and instigating rebellion.

Earlier, Guaido had warned that Maduro was launching a “mass pursuit” of anti-government legislators.

The Constituent Assembly meeting followed new sanctions announced last week by the administration of US President Donald Trump, which froze the assets of the Venezuelan government.

“After the bid to close [the National Assembly] … have no doubt that we shall know how to act with the backing of the International Community and the strength of the mobilisation of our people,” parliament tweeted on Monday.

The US embassy in Venezuela, which withdrew its staff after Caracas severed diplomatic relations with Washington in January, also issued a warning against the eventual closure of the National Assembly.

Maduro won a second term in an election boycotted by most of the opposition last year. He has presided over an economic meltdown and is engaged in a power struggle with Guaido, who has won the support of dozens of countries for his campaign to remove the president.