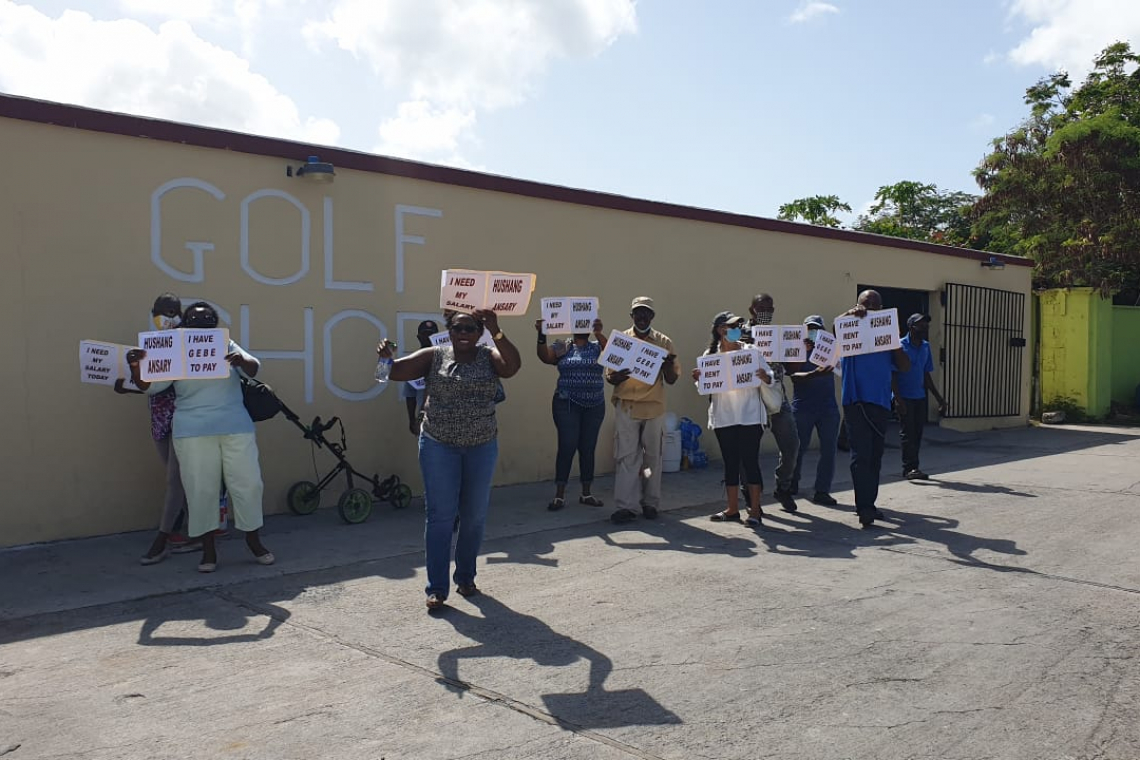 PHILIPSBURG–Workers at The Towers at Mullet Bay stood in protest on Friday, May 21, over failure of payments for salaries and other fees owed.

The 24 workers represented by Workers Institute for Organised Labour (WIFOL) have yet to receive any payment towards their severance pay as agreed on by management of The Towers. WIFOL shop steward H.H. spoke with The Daily Herald.

H.H. told the newspaper that after several months of fighting for their severance pay, workers represented by their lawyer Jelmer Snow of BZSE Attorneys at Law ultimately reached an agreement with management recently.

With this agreement they would receive a severance payment of outstanding salaries, vacation allowance and late fees, which would be done in two separate payments. The first payment was to be made to the workers’ accounts 24 hours after signing. This agreement was signed on May 6.

H.H. said this part of the agreement had not been upheld. In fact, this newspaper understands that the union’s lawyer was told by legal representation of The Towers the day after the agreement was signed that all of a sudden no payments could be made because a lien had been placed on the entire Mullet Bay property some three years ago.

On reaching out to management regarding the lack of payments H.H. was informed that the funds were not available for payment and the workers would have to wait to receive it. Although this did not sit well with the workers, another week of waiting took place before they decided that “enough was enough” and they were done waiting.

On Friday morning the 24 workers took to the golf course at Mullet Bay where they stood in protest.

H.H. said the mediator was notified during the course of the protest and called an emergency meeting. H.H., WIFOL president Theophilus Thompson, their lawyer and management of The Towers, including Clarence Derby and his lawyer Richard Gibson Jr., were present in this meeting.

This newspaper understands that the lawyer representing the workers got up and left at some point during the meeting, due to the lack of progress in discussions with management of The Towers. At the moment the workers are waiting on their next move.

H.H. told this newspaper that only 24 workers at the Towers were members of the union. Several others who were not union members also took The Towers management to court for lack of salary payments. He said these persons also came to an agreement with management and this was settled out of court.

Thompson said the workers have continuously fought and maintained that their rights should be acknowledged, maintained and respected.

Workers at The Towers have been engaged in a back-and-forth with management since they were sent home during the onset of the COVID-19 pandemic in April last year.

After they were sent home, workers were being paid only 50 per cent of their salaries. This they protested and fought against for several months, but salary payment stopped altogether in October. The workers, their representing union and lawyer have engaged in negotiations with management since then to be paid.

Many are still out of work and in dire need of their salaries owed.

Thompson told this newspaper Sunday evening that follow-up meetings will take place, as “this is not over.”

PHILIPSBURG--Minister of Public Health, Social Development and Labor VSA Omar Ottley says he has received final approval from the Netherlands for the food assistance programme. This was...