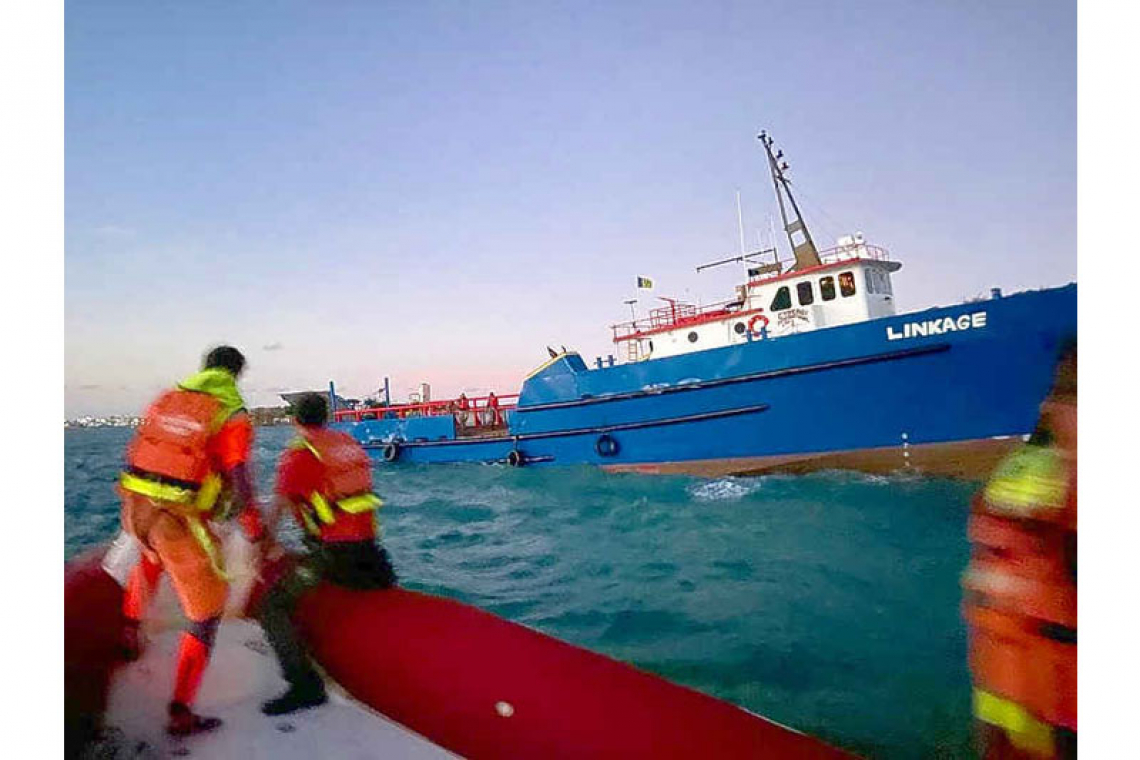 MARIGOT–On the instructions of Regional Centre for Surveillance and Rescue Operations Antilles-Guiana CROSS-AG, French-side sea rescue SNSM volunteers went to the assistance of a cargo vessel early Tuesday morning after it had run aground on Pointe du Bluff with three crewmen on board.

The 38-metre vessel broke anchor in front of the port of Galisbay around 3:50am. When the crew woke up and realised what had happened, they started the engines and tried to move away from the shore while the vessel was drifting rapidly towards the coast.

The vessel then suffered steering damage due to a rupture in the hydraulic system and was no longer able to manoeuvre and quickly ran aground on the coast of Pointe du Bluff.

CROSS first asked the SNSM crew members to extract the sailors from the vessel and as the semi-rigid Rescue Star had a shallow draught and could approach the grounded vessel more easily than the SNS 129, the five SNS volunteer crew members boarded Rescue Star and departed at 5:17am.

On the spot five minutes later, VHF radio contact was established between the Rescue Star and the cargo ship, and it was decided Rescue Star would approach between a series of waves breaking on the side of the cargo ship to recover the three sailors one by one.

The sailors had their bags in their hands, but were not wearing life jackets, so they were asked to put on life jackets before making the transfer, as there was a swell and all it would take would be one wrong move or one wave to sweep a person into the water.

Fortunately, the operation was successful and all three sailors managed to board Rescue Star safely without falling into the water. Rescue Star returned to the dock at Fort Louis Marina at 5:50am where the sailors were welcomed at the SNSM station with coffee, then directed to a salvage company to extract their vessel from its precarious position.

After a first unsuccessful attempt with a small tugboat that afternoon, the cargo ship was finally re-floated by a private salvage company on Wednesday with some minor damage to its hull.
Bron: Daily Herald