PHILIPSBURG–Persons looking out onto Great Bay last weekend probably could not have missed the two massive grey ships docked at the cruise ship terminal. These were Dutch Navy vessels Zr. Ms. Johan de Witt and Zr. Ms. Snellius, which departed for the Bahamas on Sunday night with materials and a contingent of military personnel to provide emergency relief aid to those devasted by Hurricane Dorian on September 1 and 2.

The two vessels, along with Dutch Navy ships Zr. Ms. Groningen and Zr. Ms. Pelikaan, were originally intended to participate in the Dutch military exercise “Caribbean Coast,” that was scheduled for September 9-19.

Involving the Royal Netherlands Navy, Air Force and Army, as well as German Navy personnel and infantry of the French 33rd Regiment, the operation sought to address ensuring a good crisis communication structure and maintaining public order and safety after a natural disaster.

“Because of the disaster two years ago with [Hurricane – Ed.] Irma and the great chance of hurricanes in this region, we try to exercise that [type of disaster scenario] every year and every few years in a bigger composition,” Netherlands Maritime Forces Commander Ad van de Sande told The Daily Herald on Saturday.

After a request by the Caribbean Disaster Emergency Management Agency (CDEMA) to the Netherlands for humanitarian assistance to the Bahamas, the exercise was cancelled and replaced by a genuine natural disaster relief operation, he said.

According to Dutch Navy Public Affairs Officer Stephan de Haan, the exercise’s scheduling for September – the peak of the Atlantic Hurricane season – was not coincidental. This was done so that in the event of an actual hurricane strike in the region, the Dutch Navy’s resources would be in position to quickly respond to a crisis, instead of having to sail across the Atlantic Ocean from Europe.

The two ships spent most of Saturday loading materials into their cargo holds in preparation for Sunday’s scheduled departure.

Hydrographical research ship Snellius has advanced sonar equipment on board to chart underwater damage, shipwrecks and other blockades. As such, it can be deployed to assist in making Bahamian harbours accessible after the hurricane. Two specialised diving teams are on board the Navy vessels.

Johan de Witt is a multi-purpose amphibious transport vessel that can operate as a harbour, airport and storage facility. It has a large hold for vehicles and relief goods. There is also a medical team and a company of engineers on board, as well as three helicopters, two rapid intervention boats and four amphibious vessels. The ship can also make its own potable water that can be brought ashore, Van de Sande said. 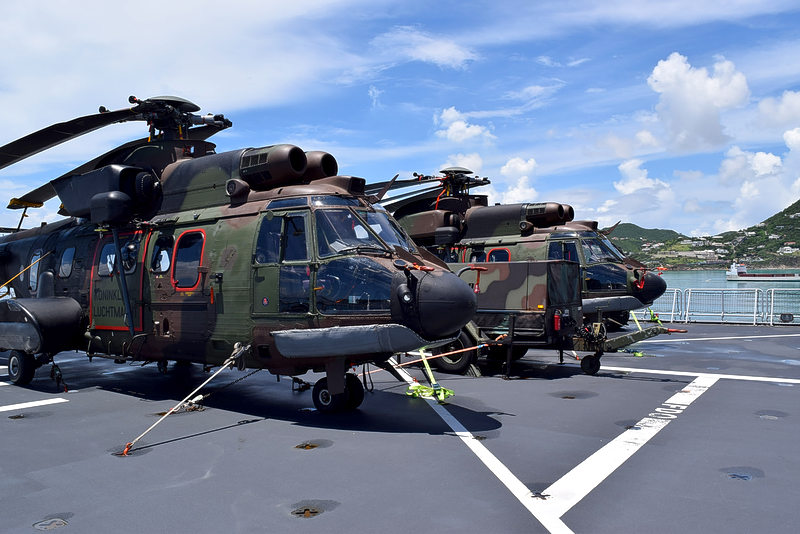 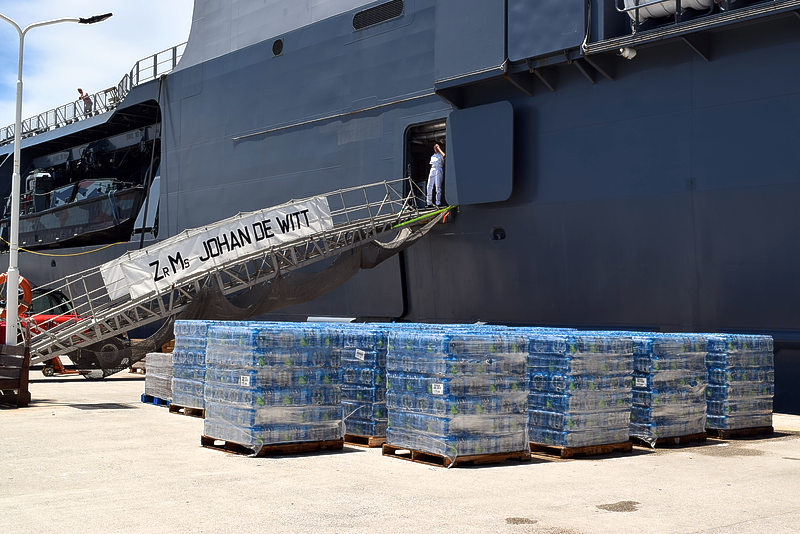 Most of the material was sourced in St. Maarten, said Van de Sande.

The Dutch Defence Ministry also sent additional military personnel from the Eindhoven Military Airport on Saturday. A KDC-10 transport aircraft of the Royal Netherlands Air Force, which was also used for transport to St. Maarten after Hurricane Irma in September 2017, brought 84 Marines to St. Maarten.

The Marines are part of the 21st Raiding Squadron of the Royal Netherlands Marine Corps. This squadron is currently on permanent stand-by as Marine Spearhead Task Unit for emergency deployment inside and outside the Netherlands.

With these additional forces, there are now 524 Dutch military personnel, 50 Germans and 50 French onboard Johan de Witt. Many of the Dutch military personnel were present in St. Maarten two years ago providing emergency relief after Hurricane Irma, said Van de Sande. “We have expertise from [Hurricane Irma relief efforts], and the lessons learned from that, which of course we are going to try to take and use that in the Bahamas as well,” he said.

The newly arrived forces, including German and French military, conducted an integration training on Great Bay beach on Sunday afternoon to familiarise themselves with the Dutch landing craft, as well as ship and shore manoeuvres.