MPs Rolando Brison and Hyacinth Richardson walking out of the meeting. 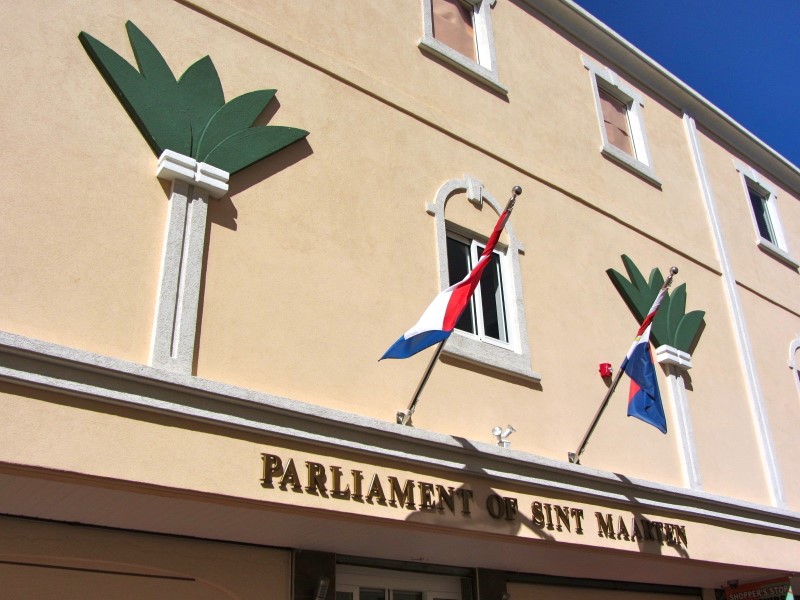 PHILIPSBURG–Minister of Housing, Spatial Planning, Environment and Infrastructure VROMI Egbert Doran on Wednesday escaped facing a motion of no confidence that was going to be tabled by Party for Progress (PFP), after two governing coalition Members of Parliament (MPs) walked out of the public meeting resulting in lack of quorum for the meeting to proceed.

The meeting was called to discuss requesting advice from the Council of Advice regarding article 50, paragraphs 2 and 3, of the Constitution as it relates to suspended Independent MP Claudius “Toontje” Buncamper. At the start of the meeting PFP MP Raeyhon Peterson raised a ‘Point of Order’ and requested to add to the meeting’s agenda “Parliament’s confidence in the Minister of VROMI.” The request was supported by two MPs.

Following a brief adjournment to add the agenda point, United People’s (UP) party MP Rolando Brison, during a ‘Point of Order,’ indicated his displeasure with the adding of the agenda point. “It’s so cute sometimes when political parties claim to be beyond political games and the first thing you see is a political game,” Brison said. “We came here to debate the topic for a colleague Member of Parliament for a solution to his situation. You, in the middle of the recess, call[ed] an urgent meeting knowing full well that various members are off island. Ok, and then this shenanigan is played. Madame Chair, I am of course, not even entertaining this nonsense any further. I want to just leave everyone here with a very clear reminder since we were supposed to come here and debate the constitution which I came very well prepared to debate, but now we know what the real reason was, why this meeting was called and I just want to leave you all with this: Article 61 of the Constitution: Parliament may deliberate or take decisions only if more than half of the serving members are at the meeting.”

Brison then requested a roll call, following which he and National Alliance (NA) MP Hyacinth Richardson walked out of the meeting.

Absent with notice were NA MPs William Marlin, Angelique Romou and George Pantophlet and UP MP Sidharth “Cookie” Bijlani. As there had been no quorum, the meeting was adjourned until further notice.

At the end of the meeting Peterson told The Daily Herald that had the meeting continued with a quorum, PFP would have tabled a motion of no confidence in Doran. “But now we have to hold on to it because when we eventually present it we will have to adjust it,” he said, adding that when the meeting is called again more will be unraveled.