The US says it is sending aid to crisis-hit Venezuela following a request from Juan Guaidó, the opposition leader who has declared himself interim president.

Mr Guaidó’s move last month won swift backing from the US and others but triggered a power struggle.

Venezuela’s President Nicolás Maduro has accused him of mounting a coup and retains major international allies.

He has dismissed US offers of aid as a pretext for military intervention.

Maduro: Dictator or defender of socialism?

Who is Juan Guaidó?

Saturday saw thousands take to the streets of the capital Caracas for protests in support of both President Maduro and Mr Guaidó.

Crucially, Mr Maduro retains the support of the military, but ahead of the demonstrations Mr Guaidó was given a boost after an air force general – Francisco Yanez – became the highest-ranking military official yet to pledge support for the opposition leader.

Mr Guaidó says he has held secret meetings with the military to win support for ousting Mr Maduro and also reached out to China, one of Mr Maduro’s most important backers.

How will the aid scheme work?

Mr Guaidó does not control any territory in Venezuela, so instead he is planning to set up collection centres in neighbouring countries where Venezuelans have fled to.

He said he wanted to set up an international coalition to gather aid at three points, and press Venezuela’s army to let it into the country.

In a tweet, US National Security Adviser John Bolton said plans were being advanced this weekend.

Answering the call of President Guaido, the U.S. is mobilizing & transporting humanitarian aid for the people of #Venezuela. I applaud the hard work of USAID, the State Department and their partners in preparing critical supplies to move forward this weekend. https://t.co/JR9poraxWl

Mr Maduro has rejected letting aid into the country, telling supporters on Saturday “we’ve never been nor are we a country of beggars”.

US President Donald Trump has told CBS that the use of military force remains “an option”.

Juan Guaidó’s move to declare himself president split the international community. Here’s where key powers stand on Venezuela
Despite the crisis, Mr Maduro is still supported by the army, in part because military officials hold influential positions and would be compromised by a change of government

Russia continues to back Mr Maduro – it has a lot at stake
The US has imposed fresh sanctions on Venezuela. This is why these ones will hurt

How did we get here?

Venezuela has suffered economic turmoil for years, with hyperinflation and shortages of essentials such as food and medicine. Millions have fled.

In January, Mr Maduro was sworn in for a second term following disputed elections which many opposition leaders did not contest because they were in jail or boycotting them.

Later that month, Mr Guaidó, who is head of Venezuela’s National Assembly, declared himself president.

He says the constitution allows him to assume power temporarily when the president is deemed illegitimate. On Saturday he said protests would continue until his supporters had achieved “freedom”.

Where do other countries stand? 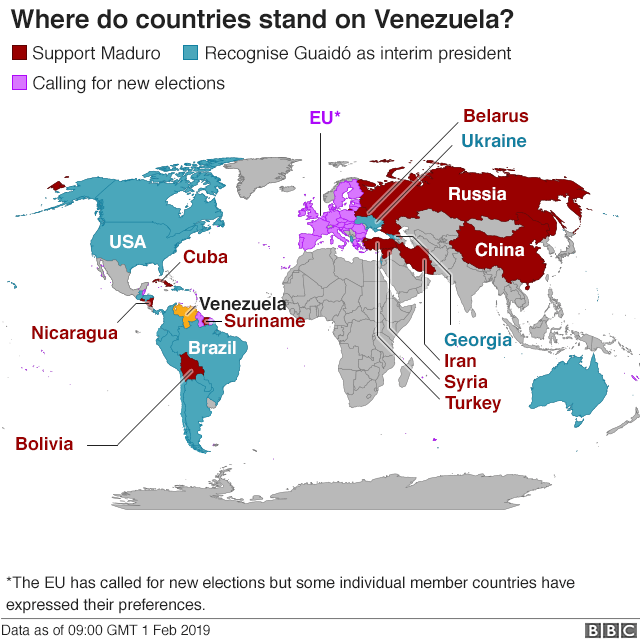 Russia, China and Turkey are among those who have publicly backed President Maduro.

Sunday sees the expiration of a deadline set by several European countries – including France, Britain, Germany and Spain – for Mr Maduro to call presidential elections. If he does not, they say, they will recognise Mr Guaidó as president.

He has though offered early parliamentary elections and talks with the opposition.